Livestreaming platforms are a dime a dozen these days, with many of them offering fans glittery features like virtual-reality visuals, gamified interfaces, and geofenced “local” shows. But Tim Westergren thinks of all that as only half the puzzle.

“Livestreaming doesn’t really matter if you can’t get people to see it,” Westergren, who spent two decades at Internet-radio company Pandora, tells Rolling Stone. “The audience is anemic and the revenue is low. Livestreaming should be a great new form of commerce for musicians — but it’s missing marketing and monetization.”

Cue Sessions, Westergren’s new music platform that launched in April this year. Sessions promises a twofold solution for musicians: Artists can host livestreams and reap significant profit from ticket sales and in-concert micropayments, and the company will also invest its own money in marketing and promotion for those artists. Each time a musician joins the platform, the company will partner directly with them to grow their fanbase. “The larger the fanbase, the larger the marketing spend,” Westergren says. Now, Sessions is promising to drive one billion marketing impressions across social-media platforms and ad networks for artists over the next six months, billing itself as the only live performance company that is actively spending money on artist marketing amid the Covid-19 pandemic. 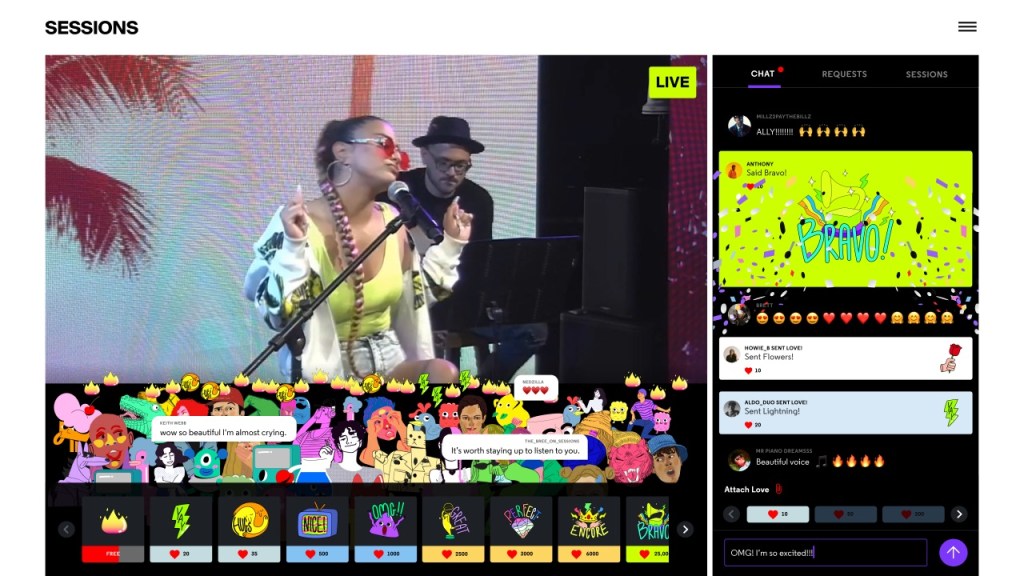 Sessions’ core mission — generating sustainable income for artists — is a personal one to Westergren, who co-founded Pandora in 2000 and led it as CEO for several years. He departed the company in 2017 as it wrestled with the viability of its ad-supported and subscription-based business models; in subsequent interviews, he has described his frustration with Pandora losing its way amid the rise of music-streaming rivals and said that he left with “a broken heart” and the sense of “unfinished business.”

“The piece we couldn’t get to is making an impact on the economic reality of working musicians. Exposure just didn’t amount to meaningful pay. I’ve been thinking about this unsolved problem since I left.” —Westergren on his departure from Pandora

“The whole idea at Pandora was creating visibility and promotion for the longer tail of artists, by building a stage that is personalized and can accommodate millions of different radio stations — to be a way for every artist to find their fan,” he says. “The piece we couldn’t get to is making an impact on the economic reality of working musicians. Exposure just didn’t amount to meaningful pay. I’ve been thinking about this unsolved problem since I left.”

After cutting ties with Pandora, Westergren spent time at Khosla Ventures, a VC firm, and Next Music, a startup building virtual music festivals inspired by video games. There, he was struck by the sophistication of video-game monetization. “The money that flows through gaming is extraordinary,” Westergren says. “It’s a well-crafted virtual economy. In a way, gaming leapfrogged music, as it was quasi-virtual from the beginning.”

He launched Sessions with several ideas borrowed from gaming — such as animated avatars and the ability for fans to make tiny in-game payments to request a song, give a shoutout to the artist, send a gift, or join an intimate group chat, so that artists can make money off of these features as well as the original virtual ticket sales. (“It’s kind of like, when you’re watching a busker, you go ‘I really like this’ and you pull our you wallet.”) Next Music’s founder, app developer Gordon Su, is also Sessions’ co-founder and CEO.

Sessions started out by cultivating 150 small-scale artists from amateurs into professionals with working salaries; now it’s also inviting bigger artists, who make $5,000 to $20,000 per show. A recent score was Ally Brooke, who Sessions guided to a Number One iTunes release after driving 15 million marketing impressions to support her live performance and new single.

“We had an artist last weekend sell $10,000 of tickets in five days,” Westergren says. “That dwarfs anyone else. And we can only do that because we know how to market and monetize. We’re good at capturing the impulse of fans. I wonder how many people on a given subscription service have made $10,000 a year?” That artist in question generated 30% of their total in ticket sales and 70% in the in-concert micropayments, he says.

Yet Sessions faces steep rivalry. The livestreaming industry, which has existed for years but boomed in earnest amid COVID lockdown, is already oversaturated with options — and artists face a learning curve signing up to the idea of livestreaming in the first place, with many of them unaccustomed to having to engage with fans over a screen. Services like Patreon also allow fans to support artists with subscriptions and tip-like payments; major tech companies like Facebook now allow custom pricing and donations-based payments, to boot. That’s not to mention Spotify and other music juggernauts that claim — just like Sessions — to be in the business of establishing a middle class for musicians, spinning up a magical sustainable income stream for everyone from bedroom amateurs to the elite.

“There are hundreds of competitors right now, from Twitch to Facebook to Instagram, and it will continue to grow because it’s such an obvious new format,” Westergren admits. But he maintains that “none of them do what we do,” which is offering musicians the chance for growth and monetization in addition to a place to host a digital show.

“The offers are essentially a big collection of tools,” he says. “That’s not enough. We generate case study after case study of our artists doing well. And so, our own marketing strategy is just to create a success story and yell it.”